home / people and planet / interview with... Hey Megane, we’re so glad you could join us. Could you tell us a bit about your background?

Sure, my mum is from Equatorial Guinea but I was born here in Madrid.

I’ve never lived in Equatorial Guinea but I’ve been back many times, especially when I was younger. My mum moved back there in 2015 but I decided to stay here in Madrid with my sister.

A lot of your work is focused on the exploration of gender and you identify as non-binary. Have you always identified as non-binary and what does being non-binary mean to you?

No, I haven’t always identified as non-binary, I think people often discover their identity over time and that was definitely the case with me.

Also, the term “non-binary” has only become widely used recently so although I may have felt like I was “non-binary” at a younger age, there wasn’t a word to describe how I felt.

For me, being non-binary means I don’t identify as being only male or female but I’m aware that identifying as non-binary also has political implications.

Our society is built around two genders and historically everything has been divided between male and female – a binary system. Whether or not you are political, by openly identifying as non-binary you are making a political statement because you are saying that the binary system doesn’t work for you.

Do you encounter barriers as a queer person of colour (POC), either in your work or social life?

I’ve found both – I’m often challenged by people on social media who follow my accounts. People question my work but they also comment more generally on race and gender issues.

There’s also a lot of trans exclusionary radical feminism at the moment which I notice when talking about gender.

[Note from editor - when Megane refers to “trans exclusionary radical feminism” he is referring to a section of feminists that hold views including rejecting that trans women are women, supporting the exclusion of trans women from women’s spaces and the opposition of transgender rights legislation.]

When I submit work proposals for projects I’m very aware that those judging my work might not understand or accept my identity and as a result, my work. Often you don’t see this kind of barrier but you are very aware that it exists.

In general, I try to interact with people who are open minded because my mental health is important!

Ethnically and culturally do you feel more Spanish, black or queer, or a mixture?

I feel like I’m a mixture of the three - each element has influenced me so culturally I’m very mixed.

Spain has a history of being a colonial power and historically it hasn’t been easy for black people to emigrate here. Therefore, black people living in Spain is a relatively new thing. Also, when black people did move here they tended to have manual labour jobs. If you’re black here people associate you with not being Spanish and so people think of you as a black person / immigrant and not as a Spanish person and also as someone who probably has a manual or low paid job.

If, like me, you want to make art, or you want to go to certain places in the city, you’re automatically seen as someone who is not from here so it can be complicated.

The problem with having national pride in Spain is that it’s associated with right wing politics so sometimes it feels strange for me to be proud of being Spanish.

I’m Spanish and a lot of my identity has been built here and I have many things in common with white Spanish people. But I know that we are not the same in every respect - that’s clear from the way people look at me when I walk down the street.

I always say I’m from Spain if people ask but as a black person, I feel like I’m in limbo. I’m from here, I was born here, but at the same time I feel like I’m treated differently to the white people that live here – sometimes it’s a difficult place to be. 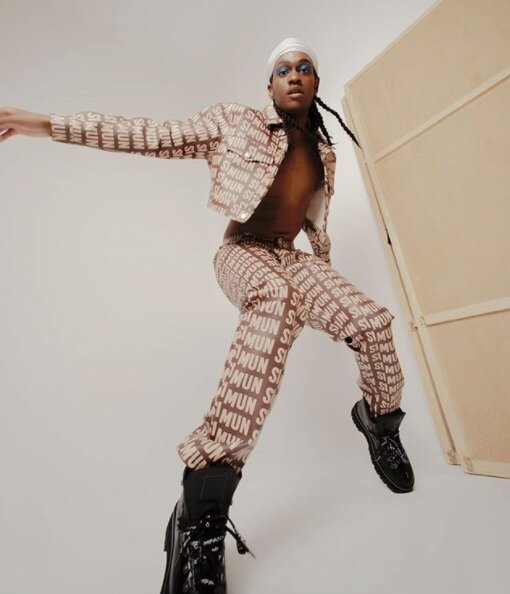 What do you make of the rise of Vox and right wing extremism in Spain?

It’s always been there, it wasn’t long ago that Spain was a dictatorship and many people are still there mentally.

Of course Vox is growing but what they have done (getting into parliament) is to legitimise what a lot of people were already thinking and give people a way to channel opinions that they already had.

Governmental institutions in Spain, including the judiciary and the police, have always been linked to fascism, from the times of the dictatorship. If something happens to you in Madrid as a queer / POC, you can’t expect justice.

The sad thing is that Vox are being given a platform to spread fake, racist news. This means that even if they lose popularity in future, the damage will already have been done.

Do you think that populism / nationalism in Europe is linked with what’s happening in the USA with the BLM protests?

The fact that the US has a leader like that makes the rest of the world think it’s acceptable. Those kinds of racist opinions are given legitimacy.

In the news we regularly see POC being harassed by police in the USA, does that also happen in Spain?

Yes, it’s very common. Last week alone I was stopped twice by the police for no reason.

It happens a lot here. The police will often go into metro or train stations and neighbourhoods like Lavapiés, where lots of immigrants live, and ask everyone who is black for their “papers”.

If you’re a white Spanish person, you would be asked for your national ID card but if you’re black they ask for your “papers” which implies that you are not from here and so don’t have an ID card.

It’s very intimidating because if you don’t have your papers they send you to the Foreign Internment Centre which is basically a jail for people without papers.

Suicide is common in the Centres and from there, they deport a lot of people to their home countries.

In the Centres they do a lot of things that are not legal, for example, sedating people to deport them.

Now with COVID, the government and the police are locking down a lot of neighbourhoods in the South of Madrid which is the ‘poor’ part where a lot of immigrants and black people live.

They’re trying to feed a narrative that says that the lifestyles of the poor immigrants are conducive to COVID. There are other neighbourhoods that have the same COVID numbers but it’s easy to blame the poorer POC. There are more and more police patrolling the streets in those areas.

Do you have any advice for our readers that want to support and be allies of POC?

I think the best thing they can do is listen to the voices of POC and spread the word.

I find one good tactic is to ask people a simple, innocent question so that they question what they’ve just said, rather than being confrontational.

I’ve adopted this tactic with my mum and sister, they didn’t understand or accept me being queer, but now they’re a lot better!

Interestingly, with my sister I’ve used it to educate her about my sexuality and gender but also to teach her about racism. She’s very capable but at work, she was regularly overlooked for promotion. She was completely unaware that this might be linked to her being female and black. She found it hard to accept initially but by challenging her ideas, I was able to change her opinion.

Are you hopeful for the future?

A lot of queer people and POC are standing up for what they believe in. They’re trying to be heard and they’re taking pride in who they are.

They’re less fearful about expressing themselves. I don’t know if that’s going to change society in general but it’s definitely going to make things better for parts of society.